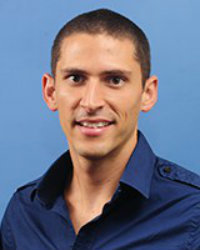 A new paper by University of Notre Dame researchers describes their investigations of the fundamental optical properties of a new class of semiconducting materials known as organic-inorganic “hybrid” perovskites.

The research was conducted at the Notre Dame Radiation Laboratory by Joseph Manser, a doctoral student in chemical and biomolecular engineering, under the direction of Prashant Kamat, Rev. John A. Zahm Professor of Science. The findings appear in a paper in the Aug. 10 edition of the journal Nature Photonics.

The term “perovskites” refers to the structural order these materials adopt upon drying and assembling in the solid state.

“Hybrid perovskites have recently demonstrated exceptional performance in solid-state thin film solar cells, with light-to-electricity conversion efficiencies approaching nearly 20 percent,” Manser said. “Though currently only at the laboratory scale, this efficiency rivals that of commercial solar cells based on polycrystalline silicon. More importantly, these materials are extremely easy and cheap to process, with much of the device fabrication carried out using coating and or printing techniques that are amenable to mass production. This is in stark contrast to most commercial photovoltaic technologies that require extremely high purity materials, especially for silicon solar cells, and energy-intensive, high-temperature processing.”

Manser pointed out that although the performance of perovskite solar cells has risen dramatically in only a few short years, the scientific community does not yet fully know how these unique materials interact with light on a fundamental level.

Manser and Kamat used a powerful technique known as “transient absorption pump-probe spectroscopy” to examine the events that occur trillions of a second after light absorption in the hybrid methylammonium lead iodide, a relevant material for solar applications. They analyzed both the relaxation pathway and spectral broadening in photoexcited hybrid methylammonium lead iodide and found that the excited state is primarily composed of separate and distinct electrons and holes known as “free carriers.”

“The fact that these separated species are present intrinsically in photoexcited hybrid methylammonium lead iodide provides a vital insight into the basic operation of perovskite solar cells,” Manser said. “Since the electron and hole are equal and opposite in charge, they often exist in a bound or unseparated form known as an ‘exciton.’ Most next-generation photovoltaics based on low-temperature, solution-processable materials are unable to perform the function of separating these bound species without intimate contact with another material that can extract one of the charges. “

This separation process siphons energy within the light absorbing layer and restricts the device architecture to one of highly interfacial surface area. As a result, the overall effectiveness of the solar cell is reduced.

“However, from our study, we now know that the photoexcited charges in hybrid perovskites exist in an inherently unbound state, thereby eliminating the additional energy loss associated with interfacial change separation,” Manser said. “These results indicate that hybrid perovskites represent a ‘best of both worlds’ scenario, and have the potential to mitigate the compromise between low-cost and high-performance in light-harvesting devices.”

Although the research was on the fundamental optical and electronic properties of hybrid perovskites, it does have direct implications for device applications. Understanding how these materials behave under irradiation is necessary if they are to be fully optimized in light-harvesting assemblies.

Manser and Kamat’s research was supported by the Department of Energy’s Office of Basic Energy Science.