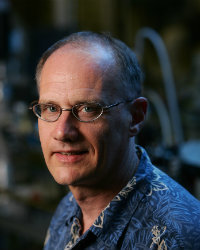 Reaction Rates of the Hydrated Electron 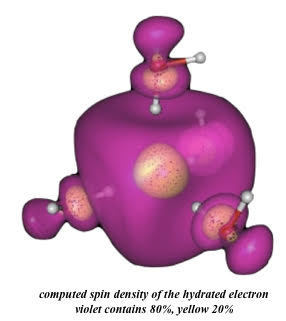 Solvation "structure" of the hydrated electron has been a subject of hot debate since its discovery in 1962.  The most recent controversy has raged over whether the electron primarily exists in a "cavity" between water molecules, or is solvated by a densified patch of solvent.  In collaboration with Kumar and Sevilla of Oakland University, we recently found that virtually all of the hydrated electron properties could be reproduced using a minimal four-water ab initio model in dielectric continuum, where one bond of each water molecule points toward a central void.  Given the large spin density on the water molecules, the ab initio model is much better described as a "multimer solvent anion" than as an "electron in a solvent cavity".

Near room temperature, recombination of small free radicals like H and OH are nearly diffusion limited in aqueous solution, i.e. once they meet their reaction is certain. We have been surprised to learn that above about 200°C, "barrierless" reactions involving H and OH are no longer limited by diffusion. Diffusion becomes so fast that the solvent "caging effect" fails to average over all possible angles of approach, and the reaction rate is limited by a "steric effect."  We showed that for recombination of hydroxymethyl radicals, the diffusion limit is not even reached at room temperature. The great surprise has been that the rates measured in water, where hydrogen bonding was assumed to be important, are identical to the "high pressure limit" rate in the gas phase. Water is "merely" a very effective third body for energy transfer.

Surprisingly, the radiation chemistry occurring in nuclear power reactors has not been successfully modeled until recently. A review of all reaction rates and radiolysis product yields was prepared in collaboration with John Elliot of Atomic Energy of Canada in 2008, which included all of the new high temperature information generated in our laboratories. Simulation of the "Critical Hydrogen Concentration" or excess added hydrogen needed to suppress radiolysis in the reactor cores was still not successful. Additional experiment and modeling shows that radiolysis yields due to neutron radiation has not been correctly measured in laboratory experiments. This key missing information is now a primary target of research.

Corrosion of metal in nuclear reactors is strongly influenced by the high radiation field, due to nuclear displacement damage from energetic neutrons, oxidizing radiolysis products produced in the water, and gamma excitation of the protective oxide layer that forms over the metal.  With an intense electron beam from our van de Graaff accelerator, we can easily mimic radiation fields at reactor conditions, but without generating radioactivity.  We have investigated radiation-enhanced corrosion in FeCrAl steels proposed as safer cladding materials following the Fukushima disaster.  Irradiation of zircalloy-4 cladding material shows a strong and unexpected sensitivity to the electron beam, whose mechanism is being investigated.

Free Radicals at a Plasma Electrode

In collaboration with the Engineering group of David Go we have investigated the kinetics of free radicals formed at a “plasma electrode”.  In this experiment a plasma discharge above a water surface forms one electrode of an electrochemical cell.  In the plasma cathode arrangement, electrons are directly injected into the water, and we have managed to detect solvated electrons at the interface by a total internal reflection technique.  In the plasma anode arrangement, the water is bombarded by positive ions, but somehow electrons still escape the liquid to maintain the plasma.  Radiation chemistry data and methods are directly applicable for understanding the chemistry and physics of these unique hybrid systems.