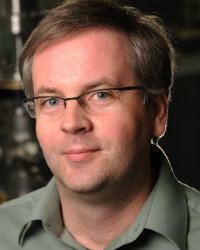 Kinetics and Mechanisms of Radical Reactions

Optical spectroscopy of transient species in sub- and supercritical water as well as under ultra-high pressures.

Experimental characterization of structure and properties of radicals, radical ions, and excited states by means of time resolved resonance Raman.

Characterization of contribution of charged species to mechanisms of radiolytic processes in irradiated solutions.

Studies of the extent of perturbation of valence shells and Rydberg excitations of molecules as a function of fluid density. 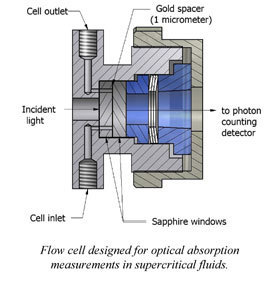 We were able to develop experimental setup for optical studies of supercritical fluids in vacuum ultraviolet range. Having that we gathered information on the nature and extent of hydrogen bonding in water manifested in its optical properties. This was done by recording vacuum ultraviolet absorption spectra for the lowest-lying electronic state of subcritical and supercritical water. For subcritical water, the spectrum redshifted considerably with increasing temperature, demonstrating the gradual breakdown of the hydrogen-bond network. Tuning the density at 381°C gave insight into the extent of hydrogen bonding in supercritical water. The known gas-phase spectrum, including its vibronic structure, was duplicated in the low-density limit. With increasing density, the spectrum blue shifted and the vibronic structure was quenched as the water monomer become electronically perturbed. Fits to the supercritical water spectra demonstrated consistency with dimer/trimer fractions calculated from the water virial equation of state and equilibrium constants. Using the known water dimer interaction potential, we estimated the critical distance between molecules (ca. 4.5Å) needed to explain the vibronic structure quenching.

Time-resolved resonance Raman (TRRR) spectra of the thiocyanate dimer radical anion, (SCN)2•–, prepared by pulse radiolysis in water, have been obtained and interpreted in conjunction with theoretical calculations to provide detailed information on the molecular geometry and bond properties of the species. We have applied the structural information on a solvated radical derived from a judicious combination of vibrational spectroscopy in solution and an appropriate theory to uncover its thermochemistry for the first time. It has been shown that the radical structure is flexible in rotation about the torsional angle, and at room temperature may present distribution of many forms, which however do not appreciably affect the stretching frequencies. The hydration energy of (SCN)2•– has been determined allowing estimation of its Born ionic radius to be 1.4 times larger than ionic radius of the thiocyanate anion, SCN–, with which the geometries obtained by the application of range-separated hybrid density functional computational methods conformed reasonably well.

Glimpse into dynamic transformations of CO2•– in water

The reductive conversion of CO2 into industrial products (e.g., oxalic acid, formic acid, methanol) can occur via aqueous CO2•– as a transient intermediate. While the formation, structure, and reaction pathways of this radical anion have been modeled for decades using various spectroscopic and theoretical approaches, for the first time, a vibrational spectroscopic investigation in liquid water, using pulse radiolysis time-resolved resonance Raman spectroscopy for its preparation and observation has been presented. A surprising feature of the resonance Raman spectra of aqueous CO2•– is the absence of overtones and combination bands above 2200 cm−1. At this energy, the photon energy lost to the radical by the scattered photon, at the time scale of the scattering process, is spent in the charge delocalization from the bent CO2 frame towards the hydration shell, followed by reorganization of the CO2 bond lengths and bond angle, along with that of the solvent in about 13 fs. This scenario resembles the opposite effect of the electron stabilization on the bent CO2 in water in ∼20 fs predicted by a recent ab initio MD simulation.

The nature of the superoxide radical anion in water

The molecular oxygen anion (O2•–), commonly referred to as the superoxide radical anion, is a homonuclear diatomic radical of immense chemical, biological, astrophysical, and environmental importance. We have applied pulse radiolytic reduction of O2 for the preparation of the radical in liquid water at room temperature and time-resolved resonance Raman spectroscopy to examine its vibrational properties for the first time. The stretching frequency, its shift from the gas-phase to aqueous solution, anharmonicity constant, and the Raman bandwidths provide an insight into the radical-water interactions and the hydration cage. In view of the spectroscopic information obtained in this work, the geometrical configuration of the water molecules in the hydration shell is flexible, and not rigid as low temperature cluster studies may suggest. The absence of solvent isotope effect on the Raman bandwidths indicates the near orthogonality of the O2•– -water (O–H/D) hydrogen bonds with which density functional calculations on O2•–(H2O)4 seem to conform.

Oxidation by the hydroxyl (OH) radical is one of the most widely studied reactions because of its central role in chemistry, biology, organic synthesis, photocatalysis in aqueous environments, wastewater treatment, and numerous other chemical processes. Although the redox potential of OH is very high, direct electron transfer (ET) is rarely observed and if occurring, it is believed to proceed through the formation of an elusive OH adduct intermediate which facilitates ET and formation of hydroxide anion. Using pulse radiolysis with TRRR detection the nature of the primary intermediate formed on the reaction of the OH radical with dimethyl sulfide (DMS) in water has been established for the first time. DMS oxidation in aqueous systems has been studied as a simplified model for the analogous reaction of the thioether group in methionine, whose oxidation in proteins constitutes one of the major damaging pathways in biological systems leading to oxidative stress and diseases. The resonance Raman spectra of DMS-OH exhibited only one fundamental vibration, at 335 cm–1, and its several overtones, a characteristic of diatomic and pseudo-diatomic systems. Assuming a first order anharmonicity in the stretching motion, and Birge-Sponer extrapolation, we estimated that a convergence in vibrational states will be reached for an energy (De)∼0.55 eV which for diatomic molecule is approximated as bond dissociation energy. Both the De and the low value of the S-O stretching frequency unequivocally confirmed a hemibonded nature for the observed OH adduct. Lack of apparent change of Raman spectrum from pH 4 to 13 indicated observation of protonated form of the adduct which finally settled more than four decades long debate on the issue of pKa of OH adducts to sulfides.