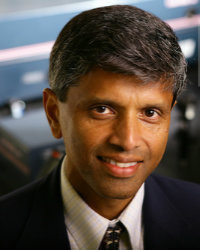 Interfacial charge transfer at semiconductor and metal interface, role of metal nonoparticles as cocataysts in hotocatalysis and design of hybrid assemblies for light energy conversion.

Electrochemistry at the Mesoscale

Evaluation of electrocatalytic and photocatalytic processes and modulation of charge transfer at the electrode/electrolyte interface through applied bias.

An intriguing aspect that influences the solar cell performance is the mobility of halide ions within the metal halide perovskite film. In particular, the halide ion mobility in mixed halide perovskite exhibits two opposite trends in response to photo and thermal activation. While halides prefer to remain as Br-rich and I-rich domains under steady-state light irradiation of MAPbBr1.5I1.5 films, they prefer to remain in their stable mixed composition when kept in the dark. The energy input from photoexcitation assists overcoming the dark (thermally activated) mixing to induce Br-rich and I-rich domains. This segregated state is maintained as long as the mixed halide film is irradiated continuously with visible light. Localization of holes on the iodide site in the MHP induces instability causing iodide from the lattice to move away toward grain boundaries. The excitation intensity threshold above which segregation occurs follows a linear temperature dependence, such that phase separation occurs above Iexc = 30 μW/cm2 white light at 23 °C. The thermodynamic rationale behind this unusual halide mobility under photo and thermal excitation will aid in understanding the stability issues of perovskite solar cells.

The photocatalytic properties of cesium lead bromide (CsPbBr3) perovskite nanocrystals make them attractive for designing light harvesting assemblies. Often ignored, the surface chemistry can dictate the excited state interactions of these semiconductor nanocrystals with charge-shuttling redox molecules. Surface interactions with the ferrocenium/ferrocene redox couple have shown that surface-bound redox species can dictate the excited-state dynamics of CsPbBr3 nanocrystals. Similarly, the strong binding between CsPbBr3 nanocrystals and methyl viologen induces a long-lived charge-separated state following band gap excitation with important implications in photocatalytic processes. The unusually long-lived bleaching of the CsPbBr3 excitonic peak in this case arises from the creation of a dipole with the hole residing in CsPbBr3 and the electron in the surface-bound methyl viologen moiety.

Two-dimensional (2D) lead halide perovskites with better chemical stability and tunable dimensionality offer new opportunities to design optoelectronic devices. 2D lead halide (bromide and iodide) perovskites of different dimensionality were prepared by varying the ratio of methylammonium:phenylethylammonium cation. With decreasing dimensionality (n = ∞ → 1). We observe a blue shift in transient absorption bleach in agreement with the trend observed with the shift in the excitonic peak. The lifetime of the charge carriers decreased with decreasing layer thickness. The dependence of charge carrier lifetime on the 2D layers as well as the halide ion composition shows the dominance of excitonic binding energy on the charge carrier recombination in 2D perovskites. The excited-state behavior of 2D perovskites  show the need to modulate the layer dimensionality to obtain desired optoelectronic properties.