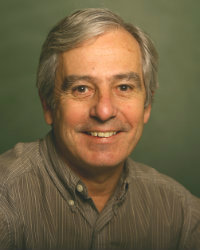 Development and use of experimental radiolysis techniques for beta radiolysis, gamma radiolysis, fast electron pulse radiolysis, and heavy ion radiolysis (protons to oxygen) with several accelerators at the University of Notre Dame. Focus is on the chemical effects of track structure.

Examination of the main pathways for medium decomposition due to the passage of ionizing radiation in water, aqueous solutions, liquid hydrocarbons, polymers, resins, and molten salts.

Elucidation of the radiation chemical effects occurring at the interface of nanoparticles and adsorbed or liquid water, metals and molten salts, as well as hydrocarbons and oxide surfaces. Studies probe radiolytic formation of transients in solids and their trapping or transport to the surface.

Monte Carlo track models take a collision-by-collision approach to follow the energy loss by the incident charged particle and all secondary electrons. The outcome of each collision is tabulated and the reactive species produced by the medium decomposition are allow to react and diffuse as the non-equilibrium spatial distributions relax. Of particular challenge, is the modeling of high linear energy transfer, LET, particles because of the dense nature of the track and the cycling of charge by the incident ion. A model for high LET track has been established on the Notre Dame cluster network and has been shown to reproduce the track kinetics for both the hydrated electron and the OH radical with reasonable accuracy in the radiolysis of water.

The radiolytic response of several aromatic compounds are being examined with respect to the contributions made by high-energy excited states. Molecular hydrogen production from the radiolysis of simple aromatic liquids with gamma rays is extremely low and these compounds are typically thought to be radiation inert. However, the yield of molecular hydrogen can increase dramatically with increasing linear energy transfer, LET, of the incident radiation. This increase was observed to be almost an order of magnitude from gamma rays to 5 MeV alpha particles. Simple heterogeneous substitutions or the addition of side chains has little effect on these yields. Most important, the yield of molecular hydrogen was found to be independent of the phase so the simple liquid aromatic compounds can be used to infer radiolytic effects of solid compounds, which are by nature more difficult to examine.

Hydrogen atoms have been observed in the radiolysis of aluminum oxy-hydroxide, boehmite, nanoparticles at room temperature using EPR techniques. Trapping sites are located in the interstitial layers occupied by the oxy and hydroxyl groups. Little is known about these sites but they must be relatively stable to trap and hold hydrogen atoms for days following radiolysis. Hydrogen atoms eventually migrate to the particle surface where they react with adsorbed water to form molecular hydrogen. A dry surface made up of only chemisorbed water shows no formation of molecular hydrogen.

Uranyl peroxide compounds are quite common and range from the mineral studtite to U-60 a cage cluster similar to fullerene. Studtite can be found on the surface of nuclear fuel rods and U-60 has been proposed as a medium for uranium extraction or storage. Although uranyl peroxide compounds are common in nature and in the nuclear power industry, their radiation stability is relatively unknown. Radiolysis of several uranyl peroxides with gamma rays and with 5 MeV helium ions found that they are indeed quite radiation resistant even to doses of 50 MGy. Some amorphization is observed at the highest doses, which is probably associated with breaking of the peroxide bonds. 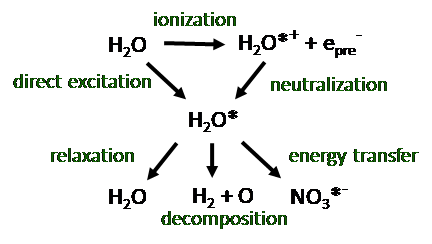 The formation of molecular hydrogen from liquid water has always been difficult to understand. Its formation in storage tanks is a major challenge for the maintenance of legacy waste and detailed knowledge of its production pathways is critical especially in very concentrated salt environments. Excited state water produced by gamma radiolysis is shown to be a significant source of molecular hydrogen and although very short lived it can be effectively quenched by high concentrations of nitrate anion. This pathway leads to entirely new methods for the exchange of energy to solutes in aqueous solutions.